That stuff went all a bit over my head since I wasn’t able to test it… I can certainly see the use for the async case, and that’d be great since the only way to run async actions is to manually click the buttons.

But then when you started adding delays, what are (were) the advantages of it over a simple RunActions?

The main advantage of using nested buttons (at least for me) was the ability to create more complex user interface. So that you can either click the big button for one action, or one of the smaller ones on it for a different one. 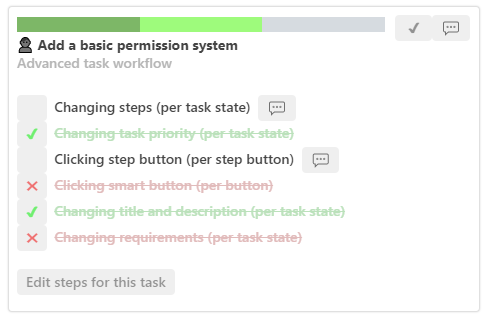 Maybe it would help if you separate out the example in a shared document? The example you posted is still quite ambiguous.

Actually, since I’m no longer going to work on this project using coda I’m going to share it whole.

@Filmos @Dalmo_Mendonca @Paul_Danyliuk Anyone maybe know how to get the current URL (of the section displayed) through formula?

I’m trying to use it for filters so I can filter using the current page as context without having to hardcode it.

In order to display it properly you need to wrap it with any kind of property. This works because a preview of an object is its first property and control objects inside of a standard object aren’t flagged to display as structure.

I found a solution of how to get rid of the popup and render the actual control object, not a control object wrapped in an object. You still provide it wrapped to ParseJson(), but then use _Deref_Object() to extract the control object:

I used this in my latest demo to insert text into Tasks table not wrapped but perfectly editable:

I was playing around with the idea of being able to enter meeting notes in a Big Cell mode, and then quickly convert those into separate rows in a Tasks table. Here’s what I managed to do: [ezgif.com-optimize (72)] This is a hacky solution that relies on deep object modification (props to @Filmos). I added the logic to include sub-lists etc when copying each task. reducing nesting level by one. I haven’t implemented the way to preserve character-level formatting (bold, color etc) because that…

Did you ever solve this?

I thought I would attempt to come up with highly convenient way to prevent a crash, by first checking in the current year was prior to 1970 using Today().Year(), and if so, skip the offending code. In principle this works by simply changing the current year on your host O/S… however, I then discovered that Coda servers did not like this technique when dealing with offline documents as presumably it messes up some authentication or sync stuff.

So, I came up with using the current user’s time zone (via CurrentTimezone().CurrentOffset which works brilliantly.
Basically, my usual timezone offset is 0 or 1. So, before I execute any undocumented function, I check the timezone offset. If it’s > 1, then I skip the function. This way, I can simply modify the timezone on my host machine, open the doc and fix the error.

An alternative to this would be to create an artificial user (say ‘Debugger’) and check if the current user = Debugger. If so, skip the offending code.

Is the idea such that if the doc crashes, you could log in with Debugger and then fix the problem and restore the doc?

The real crux of the problem is that if you use an unofficial function, you could crash your doc and end up in a perpetual state of never being about to fix it because it crashes when you open it.

The workaround is to ONLY execute the unofficial function under specific conditions, or to NOT execute them if a certain condition exists e.g based on the current user.

So you need an if() as a minimum at every instance of the hidden formula? Maybe declare a canvas variable with a short name and then if(x,code,"") - that the idea?