Ever since columns were added earlier in the year, I feel like it was a major game changer. However, there is one little thing that annoys me. The horizonal scroll bar when you add a table to one of the columns. Is there a way to get rid of it or work around it? 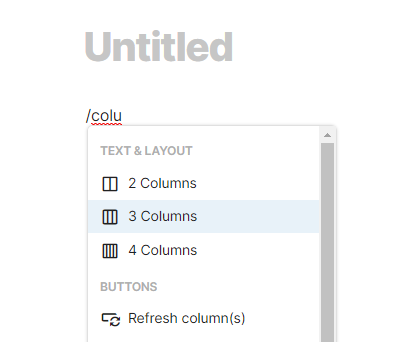 Is the scrollbar always showing up or only when you hover the table ?

You are on a windows, probably, right? I have never seen the scroll bars myself, and I use a Mac, but I have one client who uses windows, and whenever he shares his screen, he has those scrollbars too

I’m assuming it’s either your browser or the fact that you are using windows/pc?

I would suggest that Coda make it optional/ hover activated, not removed.

Yes that is correct. I am using Windows and I am also using Chrome. If you switch the page options does it actually go wide on Mac if you are using Columns?

Interestingly, if you export the page as a PDF the scroll bar disappears.

Yes this is on a PC and I am using Chrome. It also does it on Opera as well. If you export the page as a PDF it does not show up.

It’s totally a PC thing then I guess - I’ve NEVER seen them before.

@Paul_Danyliuk you use a PC right? Do you have those silly gray scroll bars?

Yeah, it’s a PC thing and I have these.
Are there no bars at all on Mac? How do you know then that you can horizontally scroll the table?

Are there no bars at all on Mac?

On my Mac, the scrollbar only appears when hovering a table with my mouse

and disappears when I’m done…

What about browser? Are you using Safari, Chrome, Mozilla, Opera, or etc?

e no bars at all on Mac? How do you know then that you can horizontally scroll the table?

I’ve never seen a scroll bar on my mac and Im SO happy about it. The scroll bars really peeve me

I guess I just know because its intutitive? Like you see a table with a column cut-off halfway and its an indication that says: HEY YOU! Theres more table over here!

What about browser? Are you using Safari, Chrome, Mozilla, Opera, or etc?

I didn’t test on Safari but on my fairly old Mac, for Chrome and Firefox, the behaviour stays the same : the scrollbar only appears when hovering a table too long to fit the canvas column and disappears when I’m done hovering …

As @Scott_Collier-Weir said in a previous comment, this looks much more like an OS thing than anything else

It’s good when you can see it cut off. What if you can’t though?

I don’t like the scrollbars and try to tweak either page columns, or the table’s columns so that the tables fit and scrollbars get hidden (at least in the locked state). But otherwise those are affordances that say there might be more content to the side.

I see them and also find them annoying. I’ve used several different browsers all on Windows but also all Chromium based. I think Coda should fix this as it is annoying and distracts from the beauty of the doc.

This issue is really getting under my skin and is part of a list of pet peeves that need to be fixed ASAP or I’m leaving coda. Craft.do is starting to get my attention. I’m not asking for the world here. I just want my docs to look clean especially when I want to use them daily but don’t because I hate the way it looks.
Don’t make me by a Mac just so that I can use my docs. Form and function must coexist!! Or, insert PC and Mac, Android and iPhone, Republicans and Democrats, etc… Sorry, I’m feeling very melodramatic lately hoping this is will resonate with someone.

I’m the PM on the team that is working on a redesign of scrollbars in the product, so this feedback is super helpful! We are actively testing different ways to make scrollbars be less disruptive in the product

. If you’d like to be part of an early testing group to test out the new scrollbars, please let me know and I’ll make sure to reach out when we are ready for Beta.

@Teresa_de_Figueiredo I’m a Windows user and would love to be part of this beta.

The scroll bars are less than desirable so if there’s a way to improve them from a UI perspective, I’m game.