Why is Contains() working only for the first entry of a list?

I need help with using Contains() to compare two lists.

The problem is that Contains() only returns True if the “value” is the FIRST entry in the “search” list.

I have a doc that multiple users can access. I have a large table and I would like only specific users to access specific rows. To accomplish this, I am attempting to use a filter and a “visibility” column. The “visibility” column indicates which role(s) should be able to see each row.

Each user is assigned a specific role in the organization (e.g. President, Local Chapter Leader, Local Assistant, etc.). We have a Team table the indicates each user’s role(s). So I am trying to write a formula that checks if the list of role(s) in the “visibility” column contains any of the role(s) the current user has been assigned.

Have you tried in “reversed” ?

Hi @Jon_Dallas , not in computer now but have a look on Find function, and check if the result is positive !

Thanks @Pch! I’ll give this a try

Well, I’m honestly not sure of what I’m going to say but I’ve never seen “the value to search for” and “value to search in” Contains() takes as inputs as being interchangeable …

I tend to write all my Contains() as “in the list of values X, see if it contains this (list of) value(s) Y”…

So, for me, when you write

Would say : Is the List("Musician") actually in the list[User Roles] ?
I’d say yes

To me this says : Does the list [User Roles] contain the value “Musician” ?
Based on your screenshot I would also say yes

But that’s only my understanding of Contains()

… And I could be perfectly wrong

I don’t think Split(",") is necessary here as Team.Filter(Name=User()).[Role(s)] should already return the appropriate list …

My understanding is also that the two parameters are not reversable. 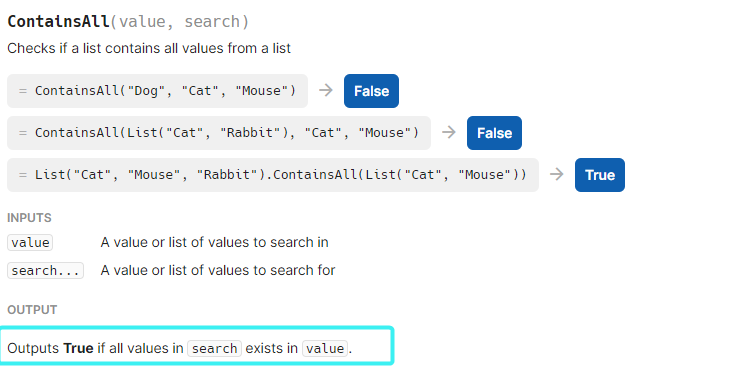 Socrates is a man, but not all men are Socrates.

Wow, thanks everyone so much! This is my first time on the Coda community and the responses are much more than I anticipated.

Still no luck here. Any thoughts?

@Piet_Strydom and @Pch Thanks! But the screenshot you provided is for ContainsAll(), not Contains(). The description of Contains() is “Checks if a list contains any value from a list.” With that description, the value and search should be reversible, no?

listOfAllMen contains Socrates, but also the list “Socrates” contains at least one value from the listOfAllMen, so it should be true either way. Or am I thinking about this wrong?

And I am using split because the User Roles are in a single Select cell. I don’t know how Select data is stored in Coda, but I figured if it’s separated by commas, then a split would be helpful. But I’ve removed it. Thanks!

Thanks so much for your support! 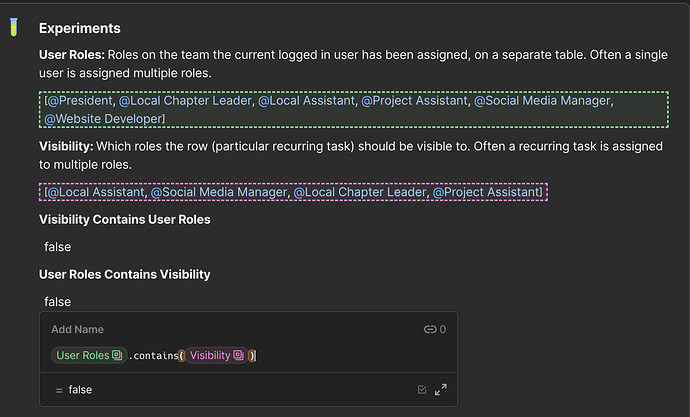 Oops.
But the logic still applies to contains () as well.

I am not at a computer at the moment.

But I think what will work is to use the foreach formula to cycle through one of the lists, and check for each of its members whether it exists in the second list.

Nie the second question becomes, “do you stop after you found the first match”? It do you want a list of trues, or the count of trues?

I know what the problem is. I will put my answer under a spoiler because I sent this thread to my students as an illustration of what I talked about in a recent lecture.