Let’s say a user is in a “Recipes” table and they’re adding ingredients via a standard lookup to an “Ingredients” table. The lookup is set to multi-select, so they can come back any time and add more ingredients. What I want to do is extract the metadata when someone adds another item in the lookup.

For example, the ingredients lookup might already have “carrots”, “onions” selected. A user comes in and selects “salt”, so now there are three items selected in the lookup. What I want to be able to find later is:

I thought I could solve it with a separate table (e.g., “Ingredients Added”) and an automation, such that a change to the “Ingredients” drop down list would trigger the creation of a new row that captured 1-3. The problem is I can’t pull the ingredient or the user. The automation creates the new row and adds the date/time using Now(), but I can’t figure out how to get it to pull the reference to the ingredient or the user who added. I thought I could get the user, but the only options to use when creating the row in the automation are the automation bot and the doc owner.

Hi Andy. I’m not in computer now, but what I’ve in mind : I would set an automation that will copy the content as TEXT from your lookup column after you add something, to a « old ingredients » column. This automation can run just after your first one.

Don’t know if that would work

I can check that later on computer

Nice, thanks Quentin! I’m still experimenting, but I think that’s got the ingredient part solved.

Now just need to figure out a good way to identify the user.

Now just need to figure out a good way to identify the user. 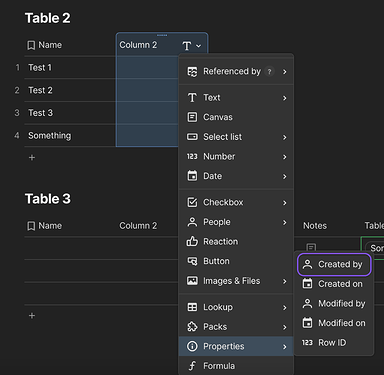 I thought so too, but it’s only picking up automation bot or the doc owner atm. I’m experimenting with a few things but not really sure atm…

That’s a good question, when an automation run, if you want to use User() value, which user will it take into account if several users are connected in the same time

Yep, I think we have your whole proces, at least in our minds

if you want to use User() value, which user will it take into account if several users are connected in the same time

But, as automations have to do the server side of Coda, I guess that would be the user actually triggering the automation first

I’m trying to access the user that triggered a “Row changed” automation in order to perform an action that makes of that user within the Then section of the automation. 2 approaches I’ve tried are: Via Step 1 Result.ModifiedBy(). This results an exception alert notification, but no other sign of error or indication of went wrong. Via User() to get the current user. This works fine when testing the automation within the automation creation UI, but when I perform the row change that should trig…

I don’t know much about your setup, but I probably would have used a button to add an option

(I’m a button kind of maker

I thought about a button, but in this case I’m trying to make it as painless as possible for the user.

Got it working with modifiedby! Thanks for working through this with me!

Now I can create a timeline of all ingredient changes to the “Recipe” table. I can see who’s updating Recipes and what Ingredients they favor adding.

Of course recipe/ingredient is just an example, not what I’m actually using this for. Will post an update when I’ve got my actual use case cleaned up.

Of course recipe/ingredient is just an example, not what I’m actually using this for

Happy to have provided a little help on that interesting subject

In either case I hope the fruits are stable safe!