A Microsoft OneDrive pack is live and in the gallery! It allows you to:

You can install the pack right here 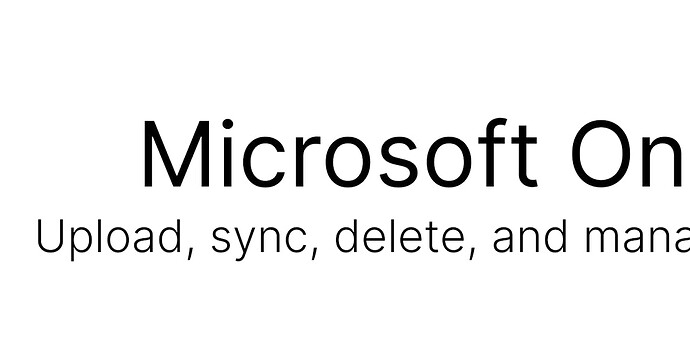 You can learn how to use the pack right here

Tell me the difference between a sharepoint folder and a one drive folder and I will get you an answer!

Microsoft wants you to use SharePoint for your shared document libraries, and OneDrive for your personal documents. But you can access the SharePoint folders from your OneDrive, so I don’t even know.

Would like to be part of the beta, but unfortunately I can’t right now. I’ll message you when that changes though!

Onedrive and SharePoint are two completely different applications in the Microsoft environment.

Onedrive started out as cloud based doc storage. SharePoint has much more of a document management and workflow aspect to it. It has a decent tagging system, and allows skets on files, etc.

Both of them differ from the typical Microsoft problem: to many different implementations that are not always compatible.

(I assume that’s what you were trying to say)

But why would microsoft do that??

Who knows? Too big so different people pull in different directions?

But you see it very clearly in Outlook, they have had several different versions of Outlook. Another example is OneNote - They had a real good desktop product, then they developed a different version for “some online environment” - it became their default, and was badly inferior, and then they announced that they would discontinue the desktop version. After a year or more of protest, they relented. But by that time I had tried various other topics, and finally settled on Coda. In the process they tried to trick you into moving into OneDrive as a storage environment. Between OneNotes and two storage systems, I lost a LOT of information…

Had a similar experience with SharePoint, built a nice document repository, managing statuses using tags (Completed in English, Ready for Russian, All completed, etc). Was really impressed with the tool. Then I upgraded Windows, and they not only installed edge, but disabled IE. And Edge could not access SharePoint, only through File explorer if I remember correctly … So I had an anxioius time for a while, until I found I could re-install Internet Explorer.

You had the same with Office desktop, Microsoft 365 an now lately Office 365. All work slightly different.

For everyone here: The pack is here!

The pack is live and in the gallery! Intro video at the top to help you onboard and learn how to use the pack