Before I started using Coda, I was on Notion. Once I wanted to leave Notion, my content was a copy/paste mess or I had to leave it there and start over again… until now.

What I love is that the Notion Pack allows me to work in both platforms.

When an update is made in Coda, the change will be reflected back in Notion.

So now, I don’t have to give up working in both platforms.

I have questions. We’ve got answers.

Q: I’m a Notion user but I want to try Coda with my existing docs. How can I do that?
A: You can use the Notion Pack to keep both docs up to date, ensuring you won’t lose any progress.

Q: I want to combine the power of Coda’s features, like creating word clouds, sending messages, and bringing in data from Packs with my existing Notion docs. What’s my options?
A: You can use the Notion Pack to sync your Coda doc to take advantage of those features.

Q: My team or client only uses Notion, but I want to use Coda to collaborate on their Notion doc. Is this possible?
A: You can use the Notion Pack to pull in the appropriate data and make changes that automatically sync back to your team’s or clients’ Notion workspace.

Are you ready to try the Notion Pack on Coda?

Giving Notion Coda’s superpowers → Check out his doc, copy it and try for yourself

Thank you for the introduction @steph

It was super fun to develop this Pack and even more to see how you people is using it!

This is how some users are using the Pack today:

It really opens a lot of possibilities

I am more than happy to answer questions, about the Pack, Coda, Notion and how to use it

@Leandro_Zubrezki How can I pull the page contents into a canvas column? I notice only the table columns are synced, is that right?

@Sarah_Arminta unfortunately getting the page content from the Notion API takes multiple requests to process each of the block levels and it is currently not feasible, only page properties can be synced.

Quick update for the Notion Pack:

I am a bit late to the party, but to be able to leverage the strengths of both platforms is truly fantastic… thank you.

I have a few questions:

To take the example of a task/to-do list sends out work logs, this would mean a 2-way sync where

I just want to know if it is necessary to rebuild my calculations in the synced table, or if there is a method to push changes from an existing non-Notion-synced Coda DB?

Looking at the formula automations the only DB option is to CREATE a Notion database… which, unless I am doing it wrong, does not carry over the content.

EDIT: I saw your update about using the Update Page action inside the table… However now my difficulties are:

Thanks so much for this!

More than happy to help!

I am getting a “Failed to fetch data from Notion” from a synced table. I DID try the usual “reconnect account” method… but unable to determine what is causing the error.

Make sure you are sharing the database with the Pack, the problem is probably around permissions. If you select the database and you get the list of options, does it appear?

The only way to update Notion is using the actions, UpdatePage is for updating a single page in a Notion database, if that action runs inside the database in sync in Coda, then the values will also update in place instead of you having to manually run the sync.

To use the action you have to map each property name that you have in Notion with the value in the corresponding Coda column. Feel free to share a doc with me so I can take a better look!

Wow thanks for the quick response… Before I get in too deep:

When you say; if the update page action runs inside the database in sync in Coda, then the values will also update- Does this need to be within a pack-table?

Yes always as a button column inside the Pack table.

I’m new to Coda so this may be a very basic question.

Is there a way to create a mirror of an existing Coda table in Notion, and then keep them in sync? Taking a quick look, it seems that only the other way around is possible.

In order to update the values in Notion from Coda you need to use buttons and actions as it is not possible to edit directly in the table. You can learn more about buttons here.

The Pack does not have that kind of functionality, you would have to first import the Coda table as CSV in Notion, then use the Pack to sync the database and then configure automations so every time the data in Coda changes you would update the values in Notion using the Pack actions.

It helps, thanks. But I thought the Pack keeps the Notion and Coda tables in sync automatically, is that not the case? I understand having to create the table in Notion manually, but after that does it not keep them in sync?

Starting from a Notion database you will be able to have the same data in Coda as a table and they are kept in sync, but to edit the data from Coda you need to use a button and actions.

Hello. Notion pack is great to have, but I can’t get it work

When I try to execute UpdatePage I always get “The Notion server returned an error while taking an action”. And no clues, what exactly is the problem.

Also for one of my tables imported from Notion, I can only get a part go columns that exist in Notion.

Hi Leandro, Could you elaborate on how to set the Update page button in the pack table…somehow I don’t get it to work?
Is there a formula in which I can have a button that press the refresh button in the database? I would like to have it in the same push button formula that adds a row in another coda database…not sure if that’s possible?

@genkush sorry for the late reply, could you please share a doc showing your current setup or a screenshot on how you have it configured?
About the columns you should be able to add more hovering on the chip on each page.

@Eva_Folch this is an example of the UpdatePage action configured, if you place the button in the same table the Pack will update the row in Coda in place with the result value from Notion, so no need to manually refresh it. It is possible to refresh a table from an action using the Refresh pack table action as well. 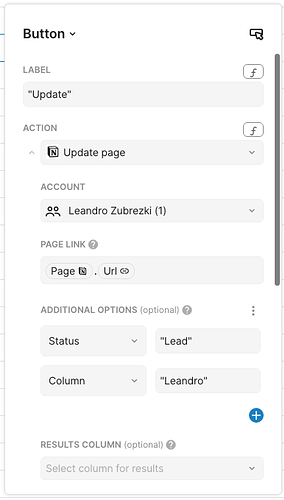